You know what they say – Paris is Always a Good Idea.

What’s not a good idea is trying to describe Paris in a powerful yet brief way that does the city any justice. Honestly I’ve been dreading this post since we got here. Most people want super highlights from a city with a few pictures and they’re done. Paris is bigger than that, it’s deeper than that, it gives more and requires more than that. So, here is my attempt to offer up Paris in a few scrolls or less. Hopefully Paris will forgive me.

When we arrived on the Thello from Venice we called an Uber to pick us up. To bad the GPS thought we were 20 miles away. After a quick pause we were on our way. The closer we got to our AirBnB apartment the more distinctively French the neighborhood became. Railway directional signs were replaced by little Boulangeries (Bakeries) and Scooters shops. A row of restaurants was broken only by a shop selling black cat tick tock clocks (yes, the eyes moved) and a local movie theater showing The Chronic.

We arrived at the apartment, got buzzed in and crammed into the smallest elevator known to man. (at least to this man) Our host greeted us at the door with a big smile and a warm hug. He asked about our travels and we shared the cities we’d visited. “Oh la la,” he shouted. In my mind – “Ha! You are so French!” With my mouth – “Yeah, it’s been fun..” When you AirBnB you’ve seen the pictures of the home but you never really know until you walk in. As I slowly walked up the stairs I saw it. Booking Yeah! Nailed it. This place is awesome. The pictures don’t do it justice. The living room is spacious, the kitchen (esp in Paris) is huge, and the private balcony overlooking the top of the Eiffel Tower and Bastille is… perfect. Dede seemed especially thankful for the bathtub, an uncommon enmity in Paris. 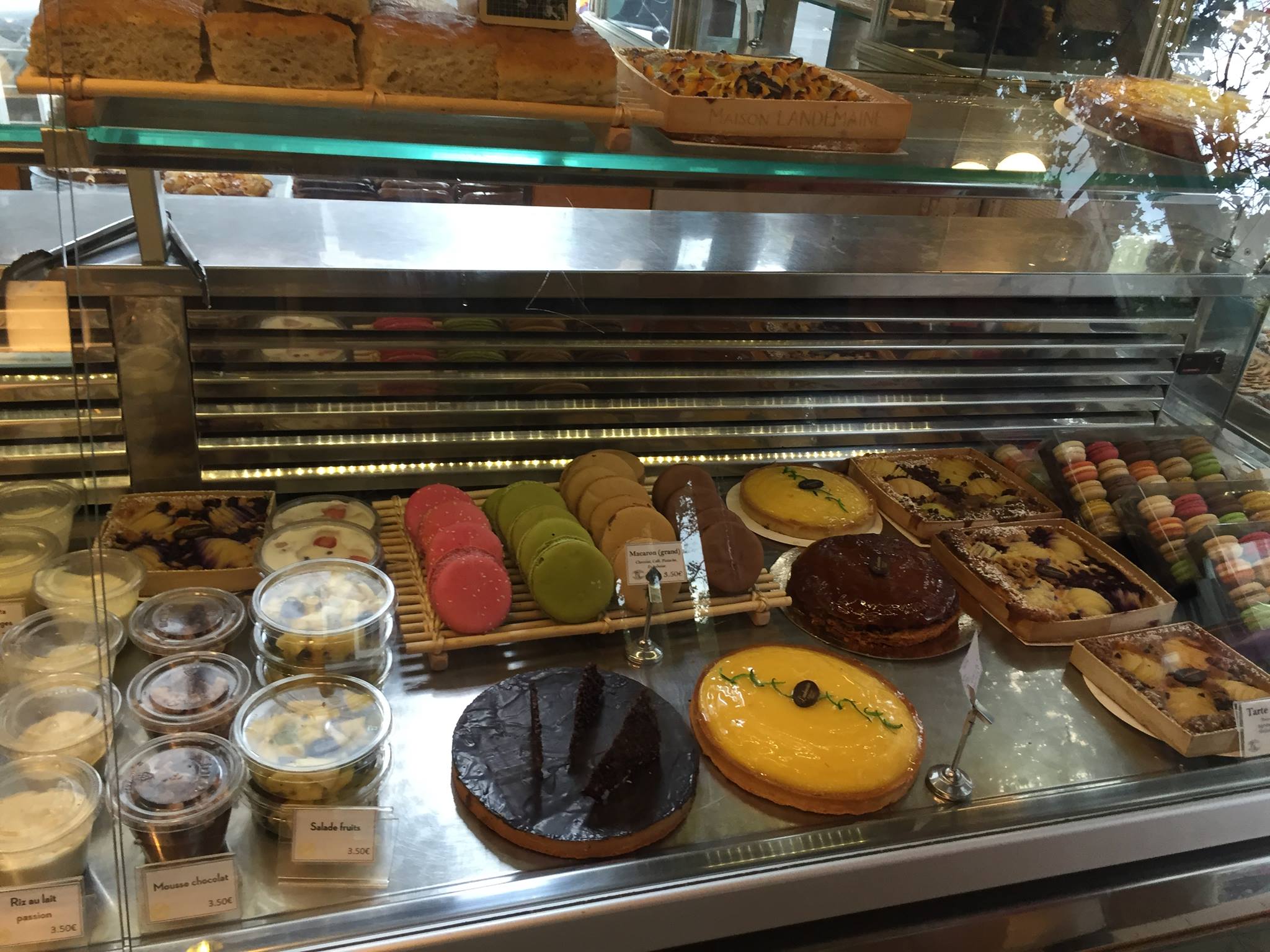 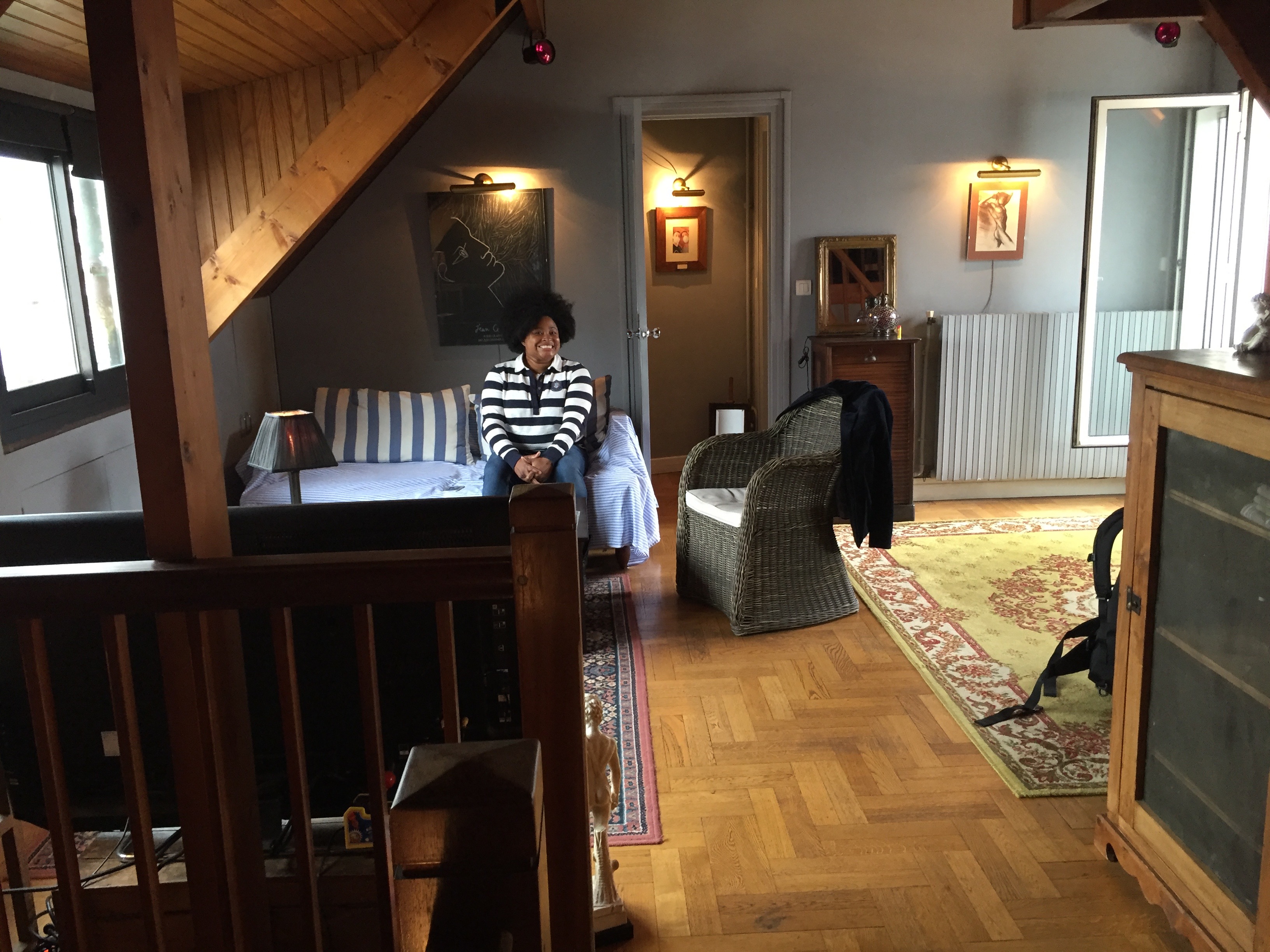 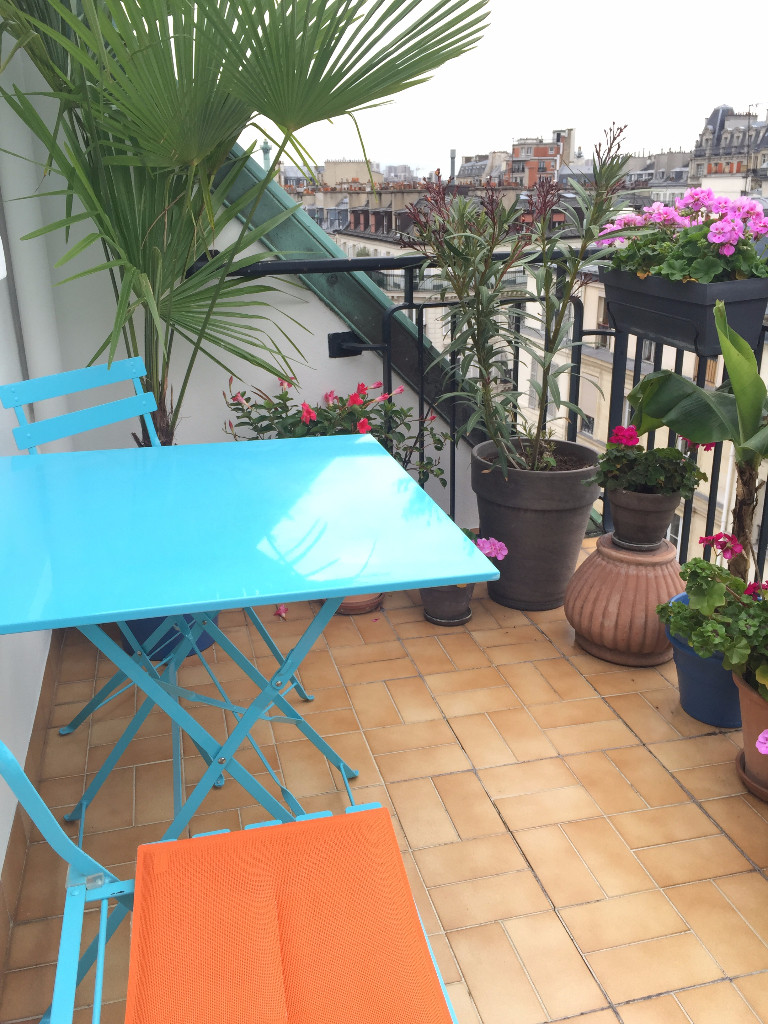 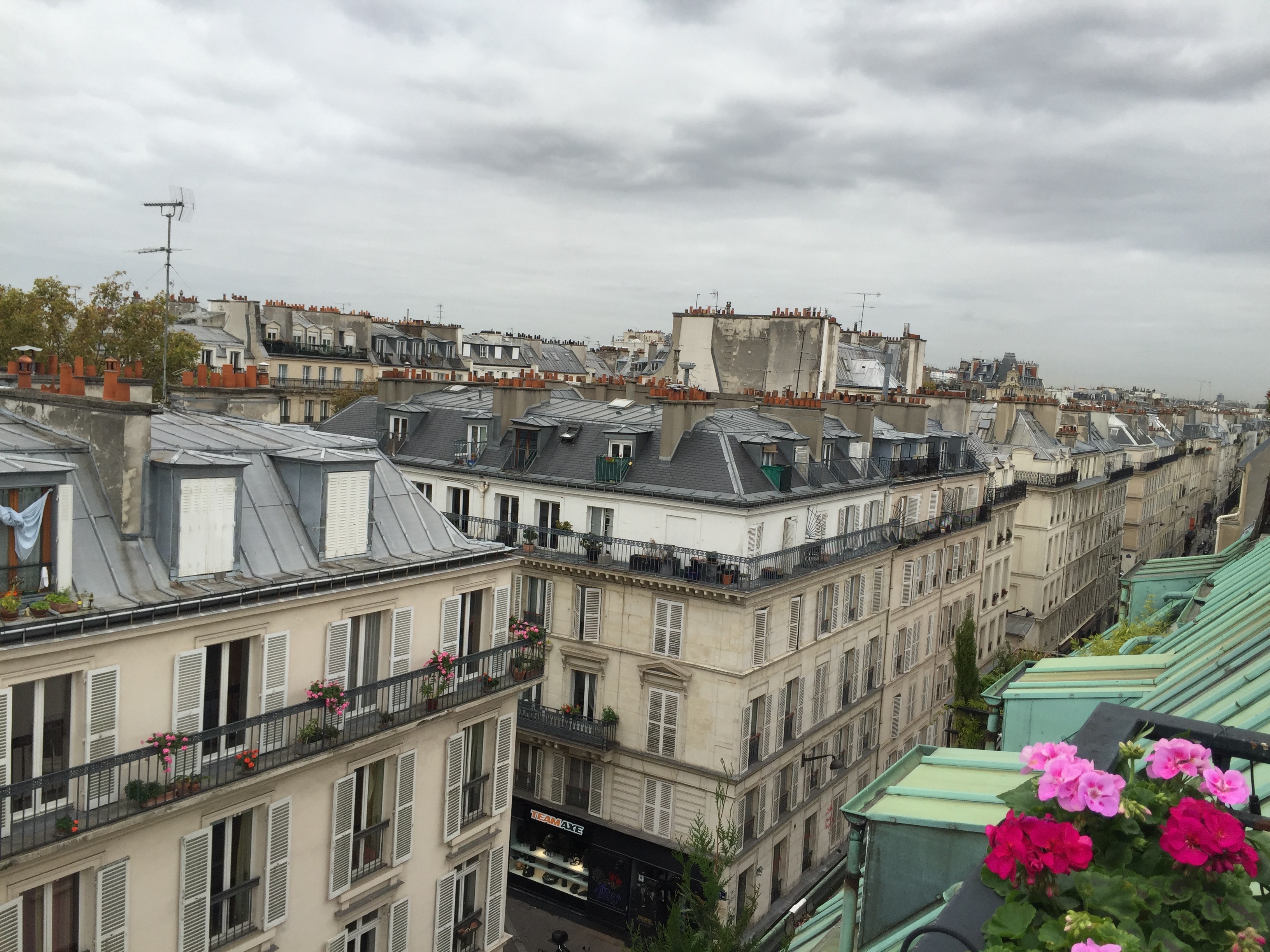 After a brief decompress we hit the streets of Parii.

We braved the Paris Metro determined to fit in. Once you’ve done New York, MARTA and Buford Highway you can do anything. We traveled over to the Royal Palace and were stunned at the expansiveness of the place. It surrounds you. You are immediately lost in it, dwarfed by its magnificence yet compelled, drawn in to see more. We wondered if they still let people inside. What a treat that would be. The courtyard is open but the building is surely locked down. (More on that later).

After dodging a few hustle men selling mini Eiffel Towers and Selfie Sticks we walked the Tuileries, sat at a local fountain and relax like the French do. After a while we Metro’d over to the Arc de Triomphe. I know you’re probably sick of me saying this but it was Huge. OK how about this – it was Enormous, it was Gigantic, it was… you get the point. We went in for a closer look once we saw people on top of it but the sign that said; “286 Feet Up” (all stairs) gave us second thoughts. We headed home for a bite to eat because we had an appointment with Sasha the Great. She was our EverPhotoShoot photographer and she was fantastic. She took us all over Paris to the best places for fantastic photos. (I’ll post an update when I get the pics) We talked about the U.S., she answered questions about France; we made a new friend. 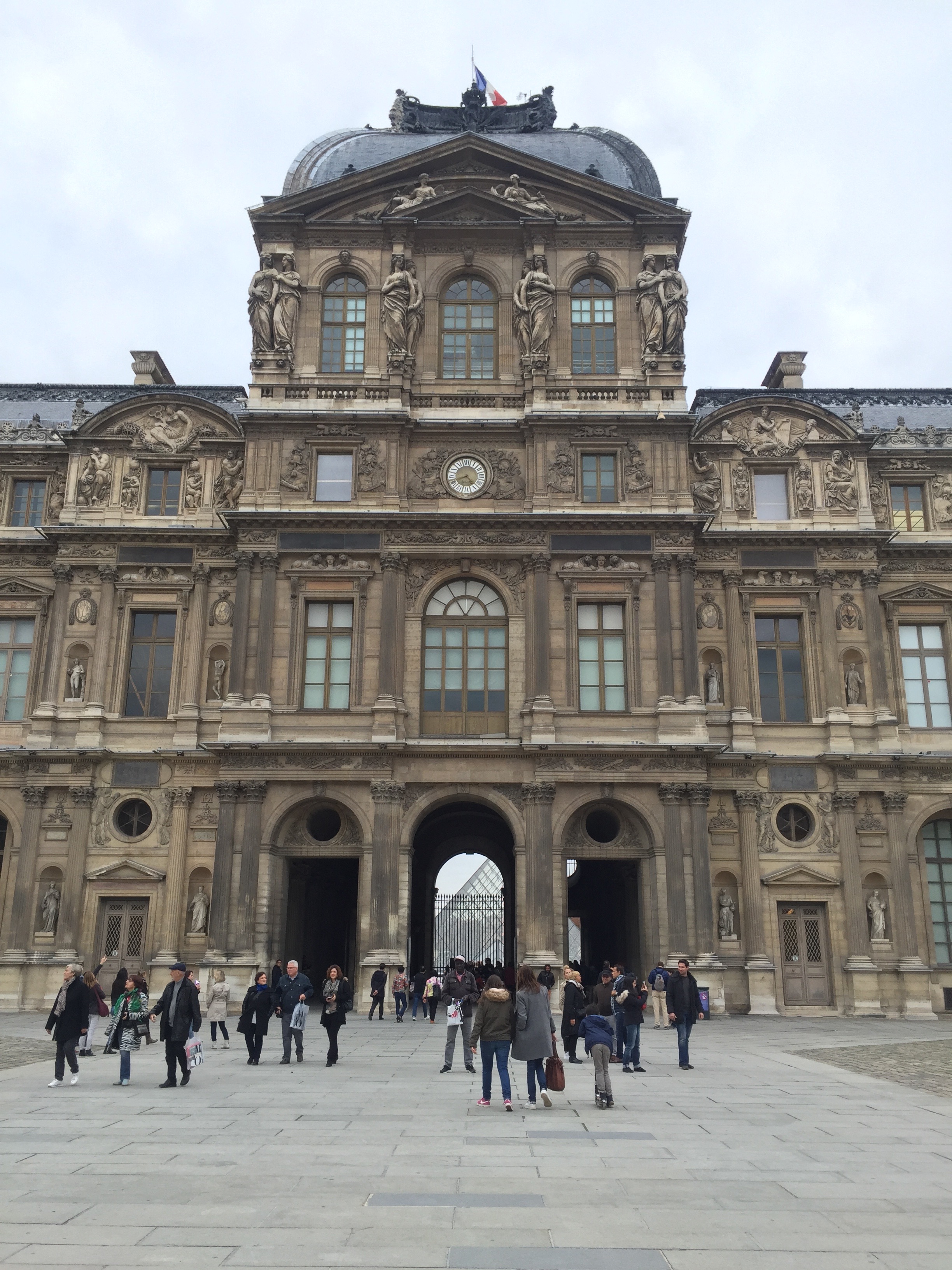 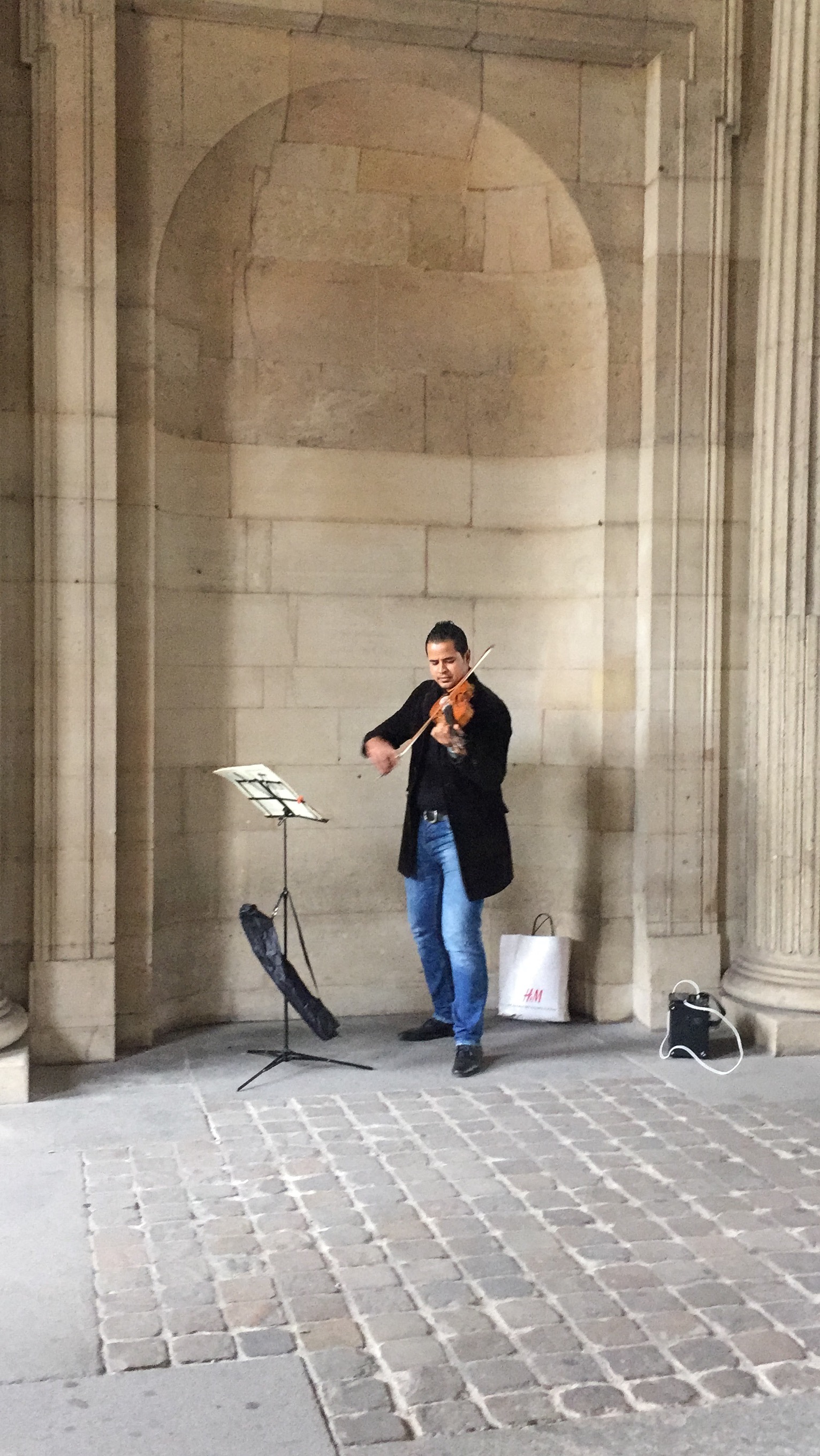 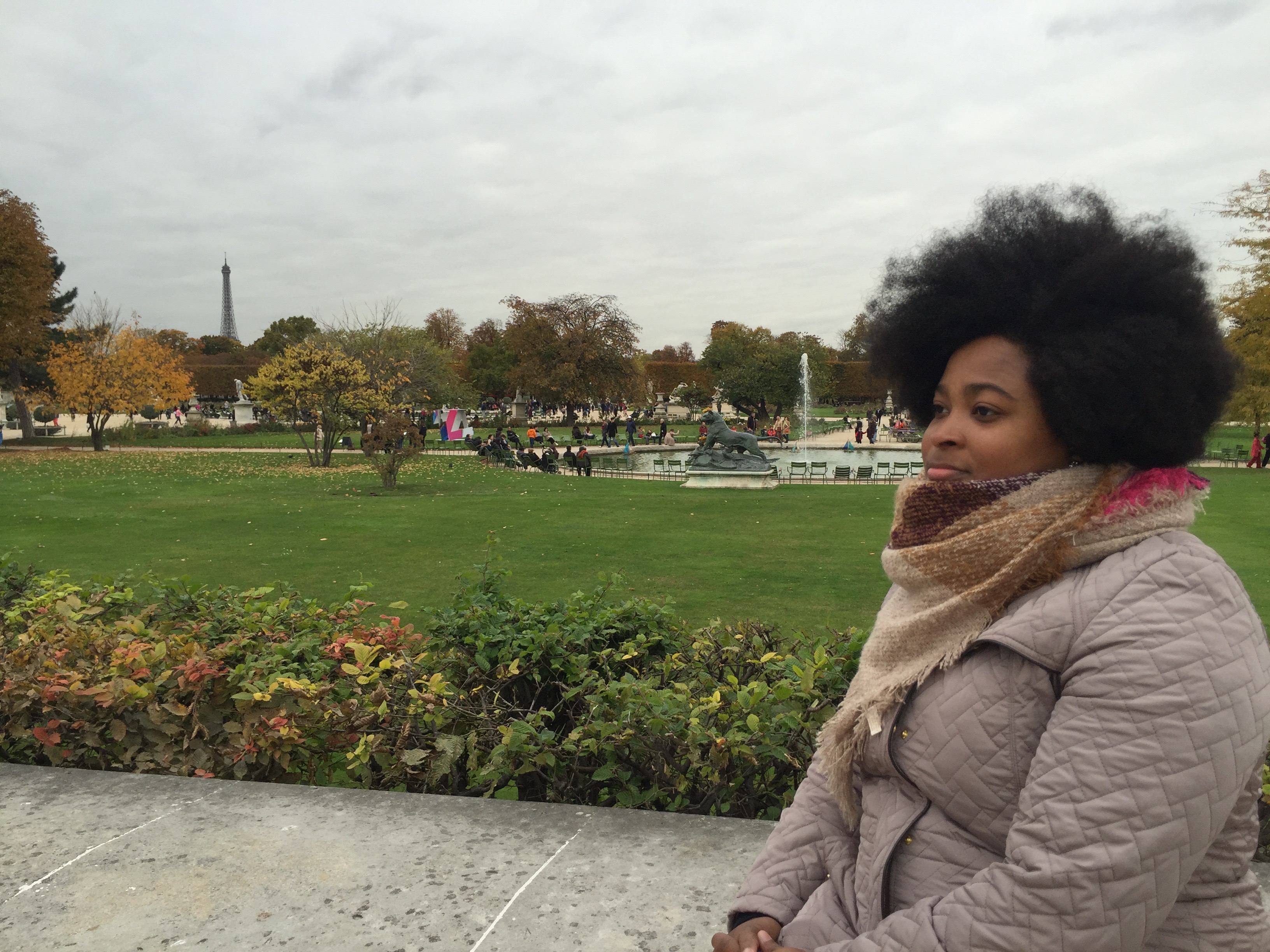 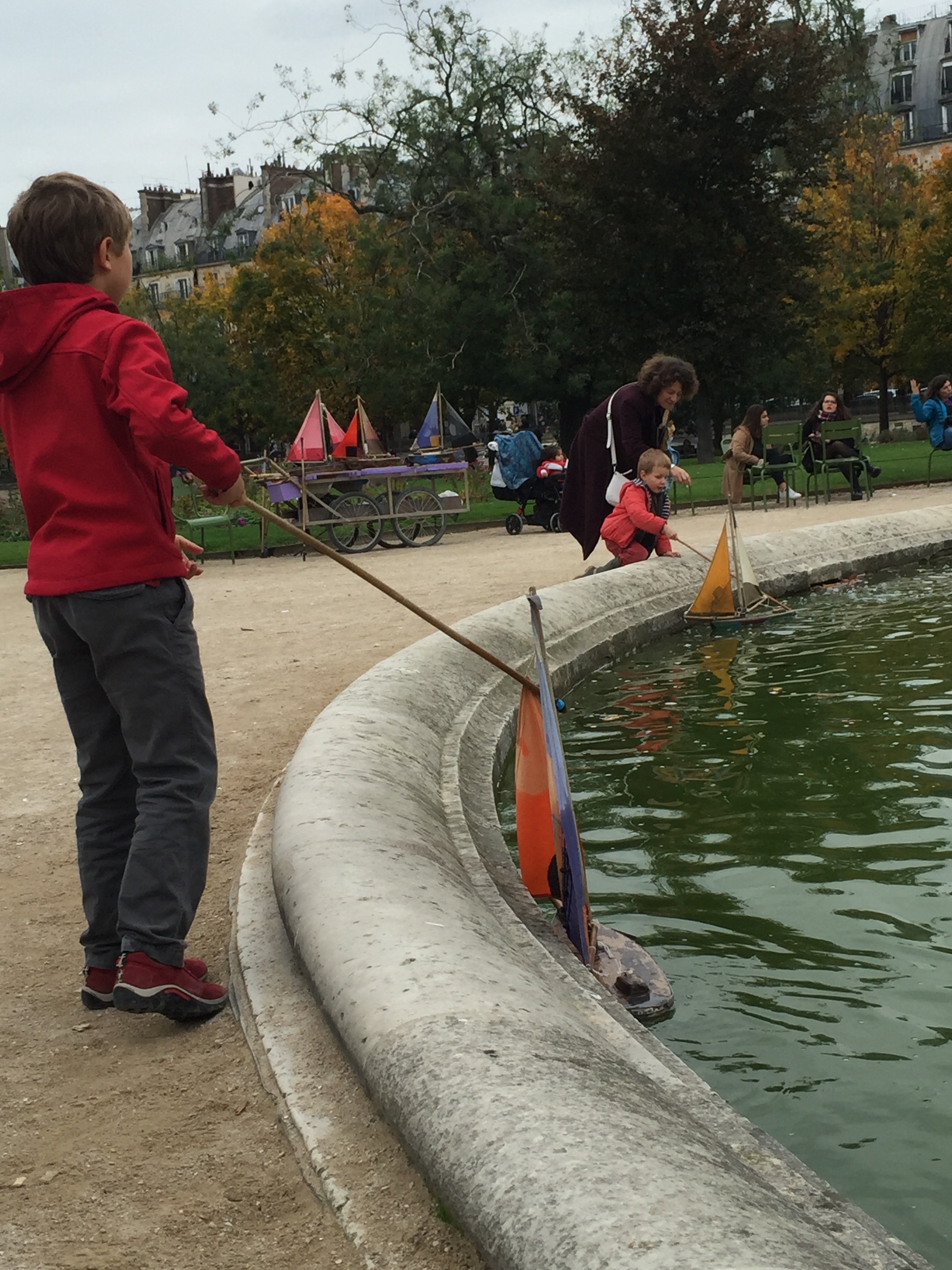 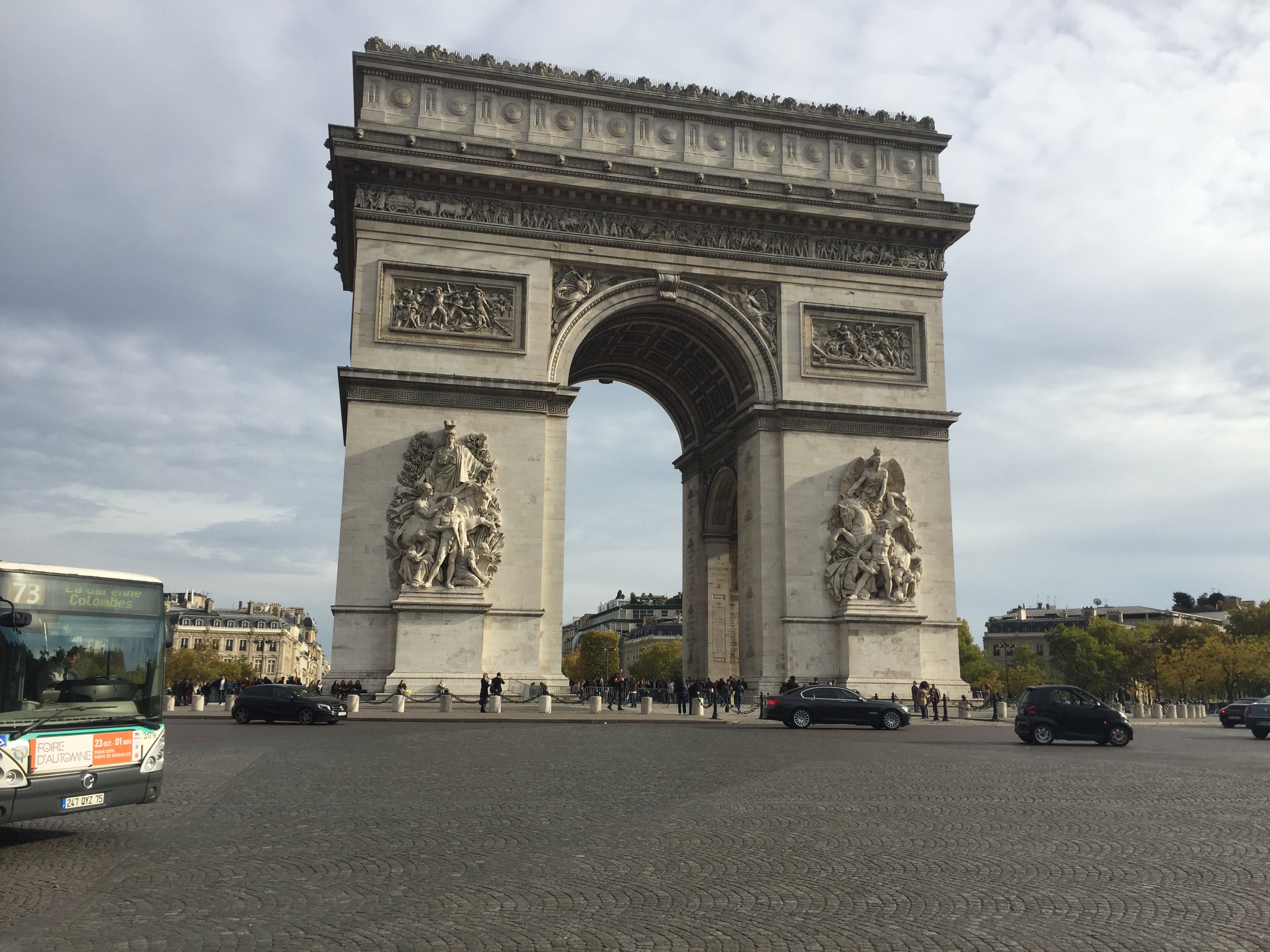 The next day we decided to go in the Louvre. When we got inside we were in for a surprise. Remember how we wondered if anyone could go inside the Royal Palace… well you can. It’s called the Louvre. Silly Americans. :-/

Inside were the wonders of the world on display for all to see: The Venus di Milo, Liberty Leading the People, The Coronation of Napoleon, King Louis XIV, The Winged Victory, The Mona Lisa, The Last Supper and on and on. 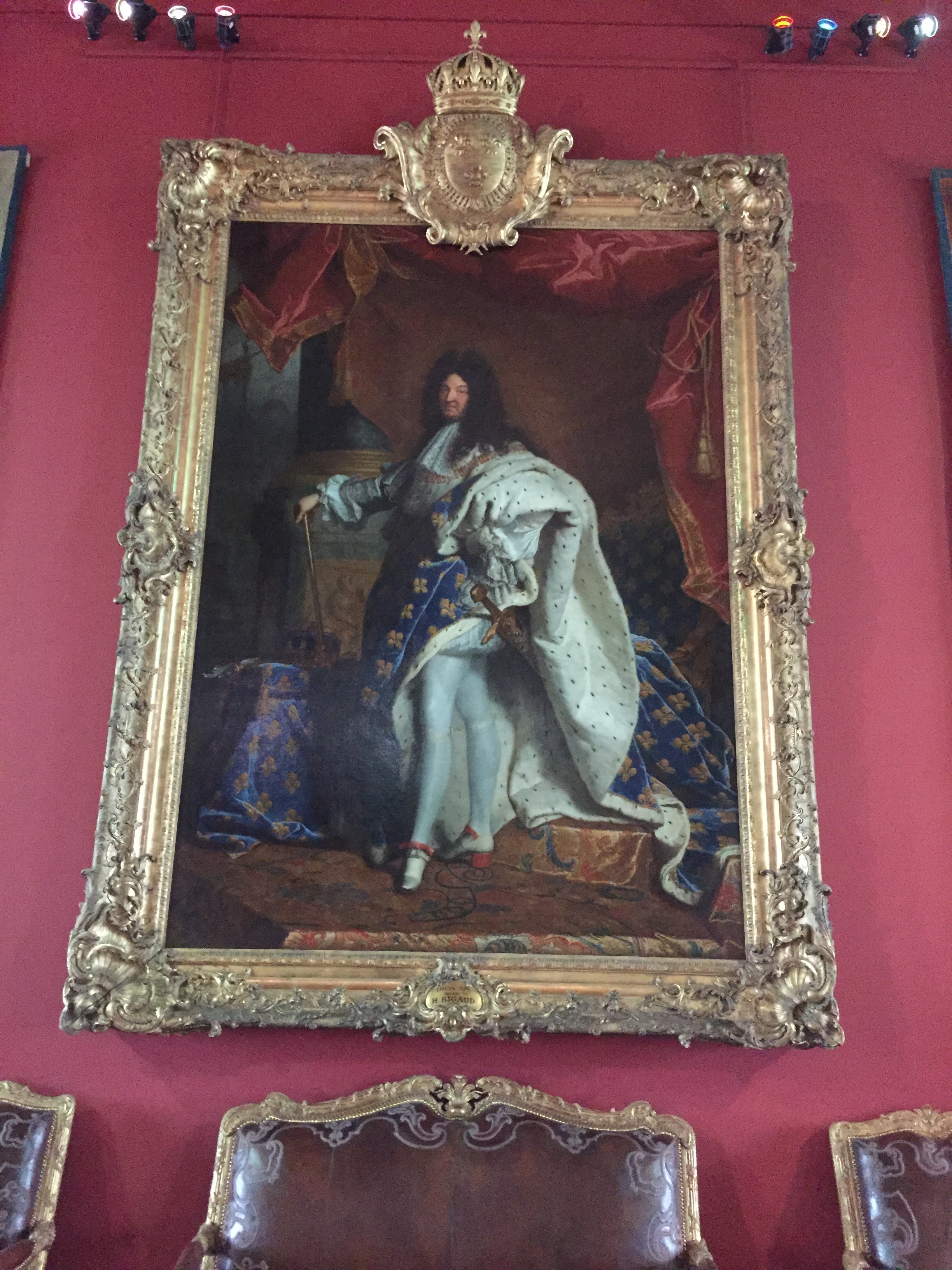 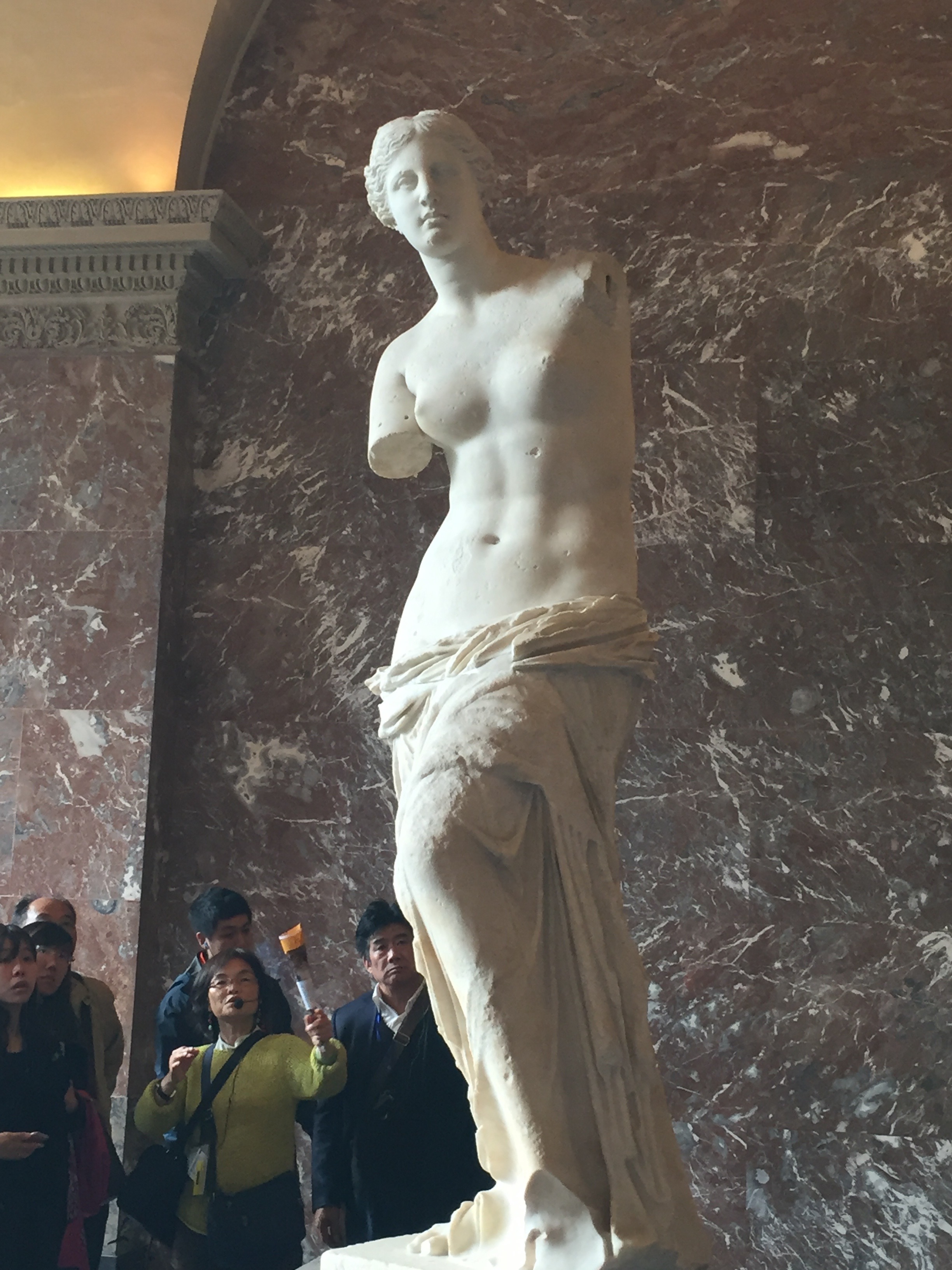 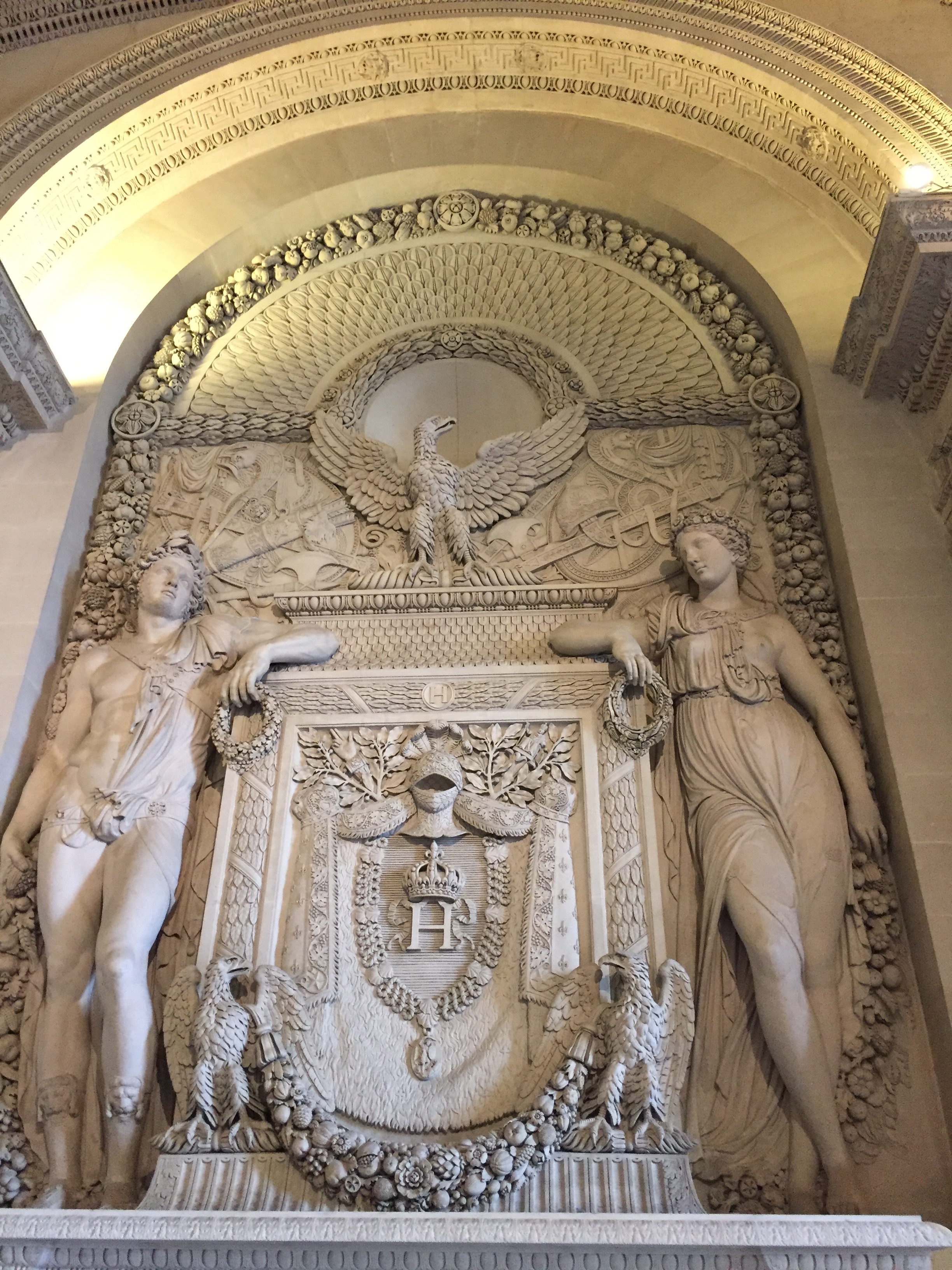 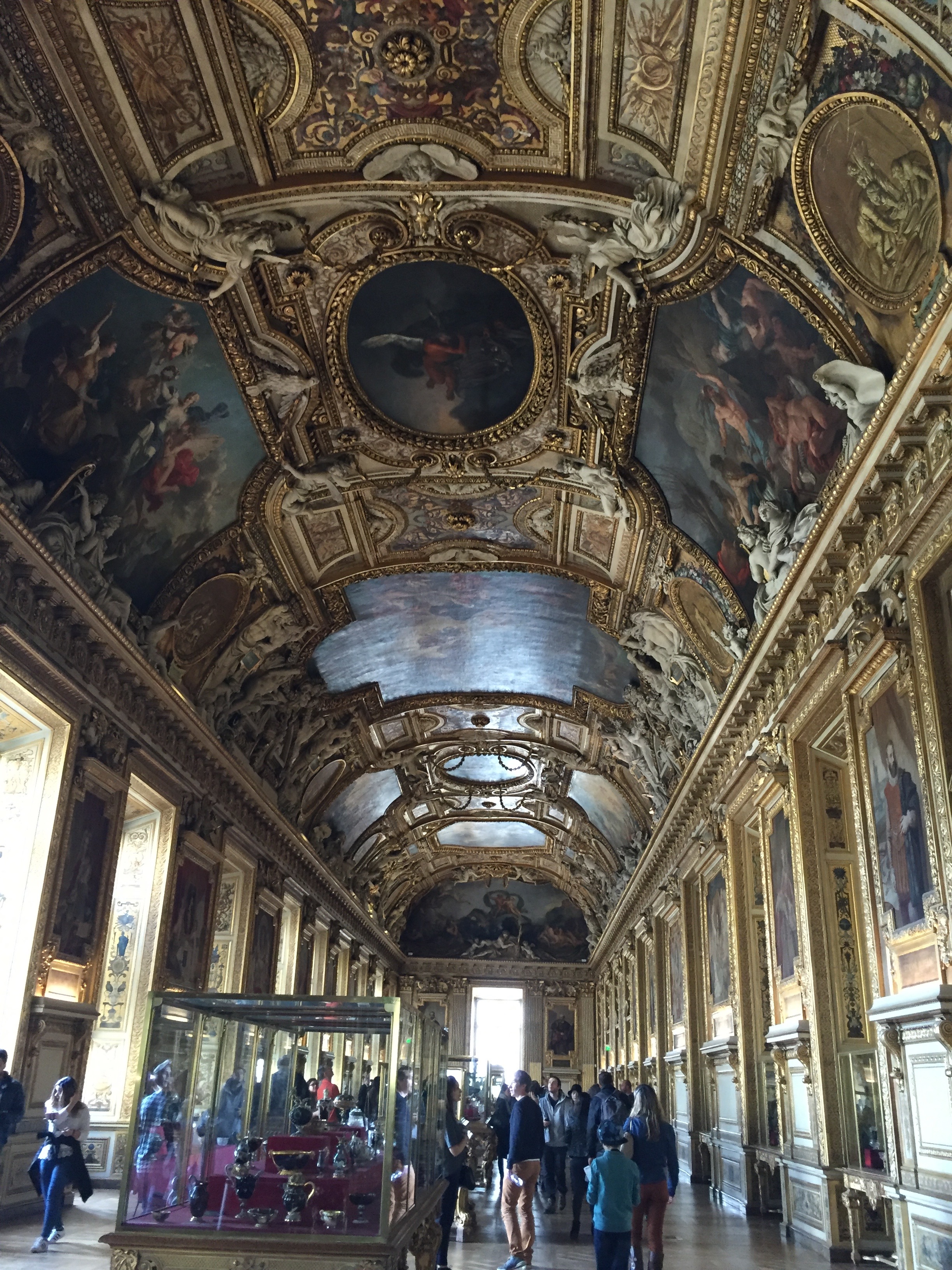 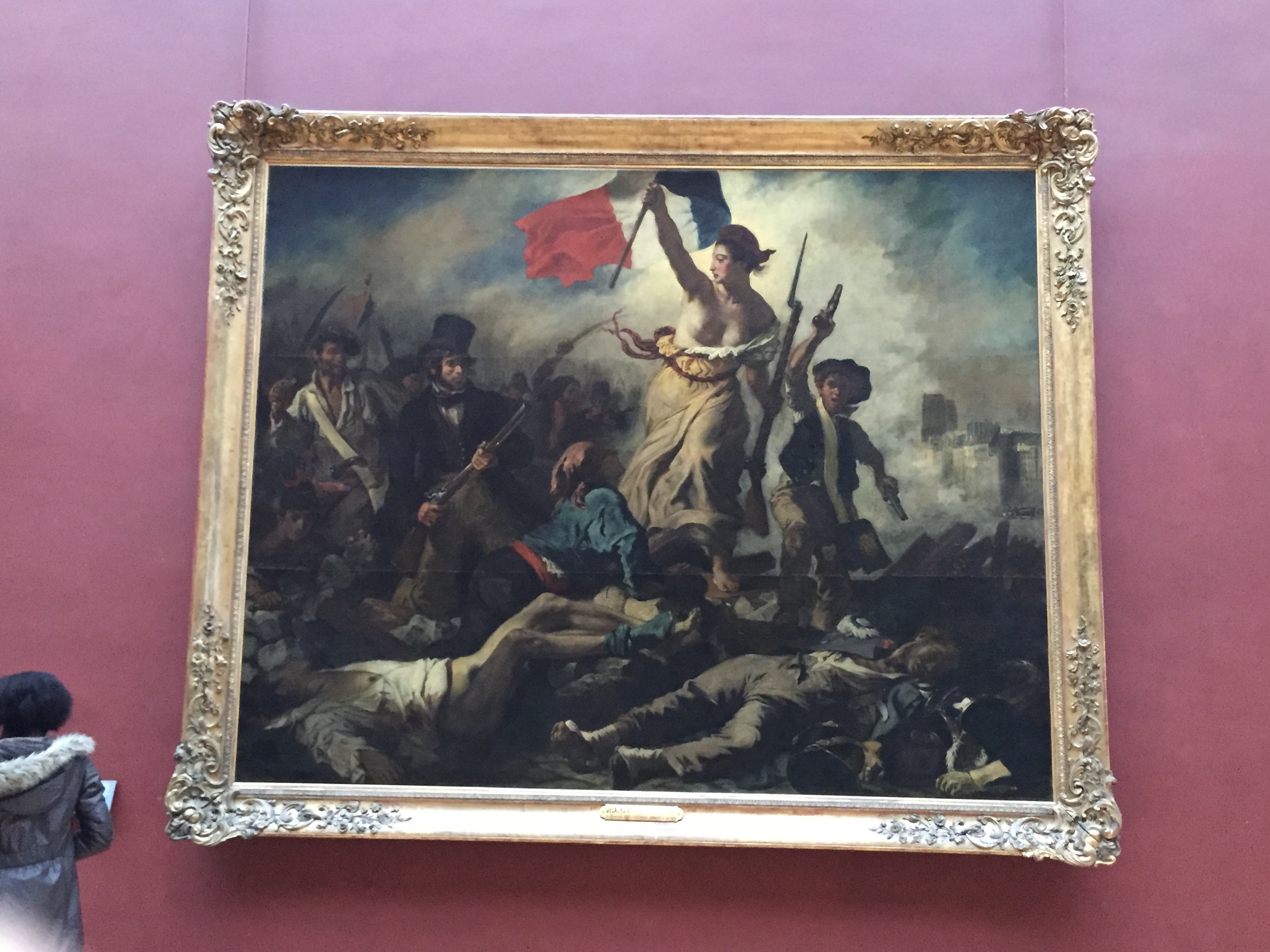 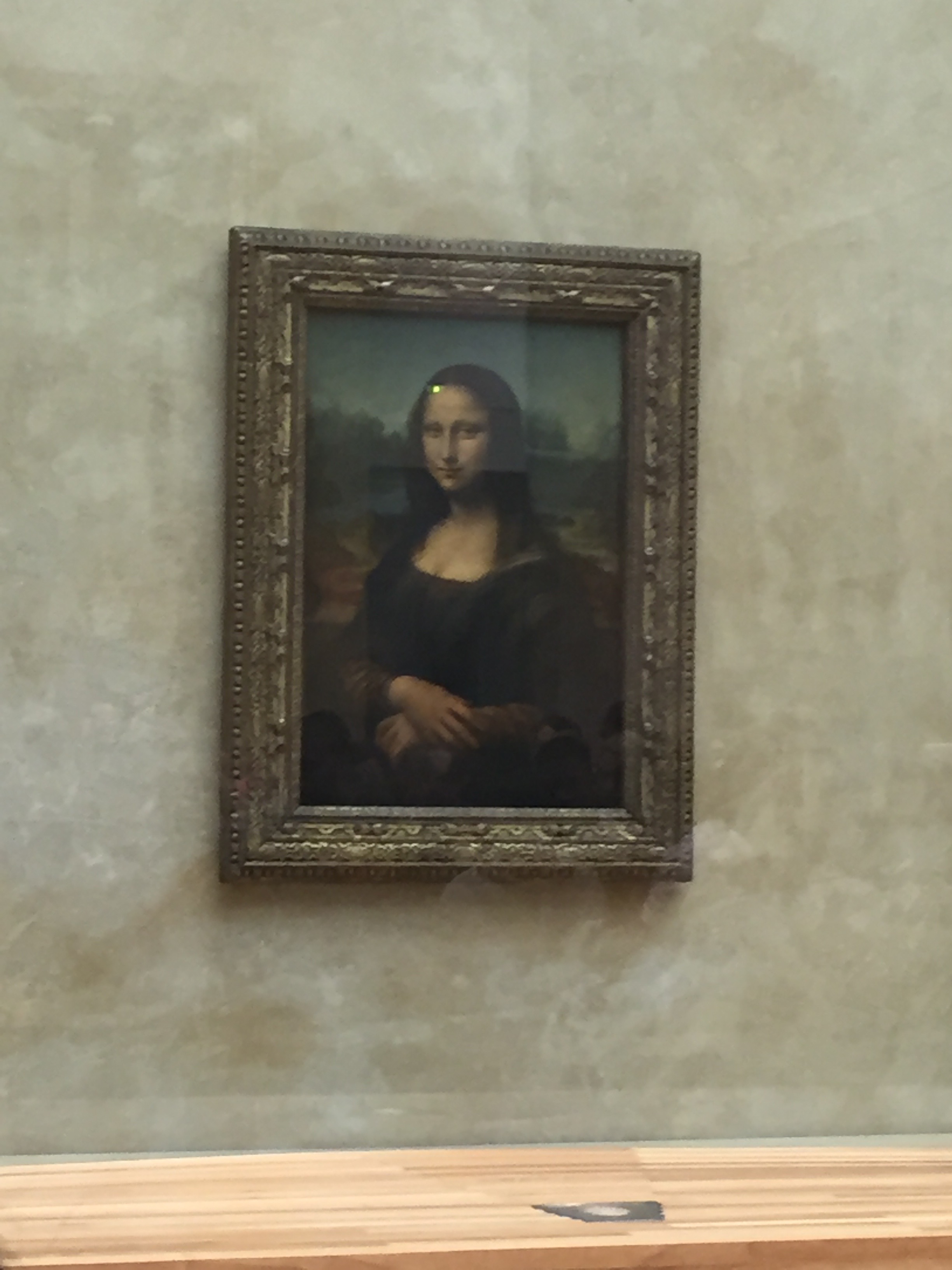 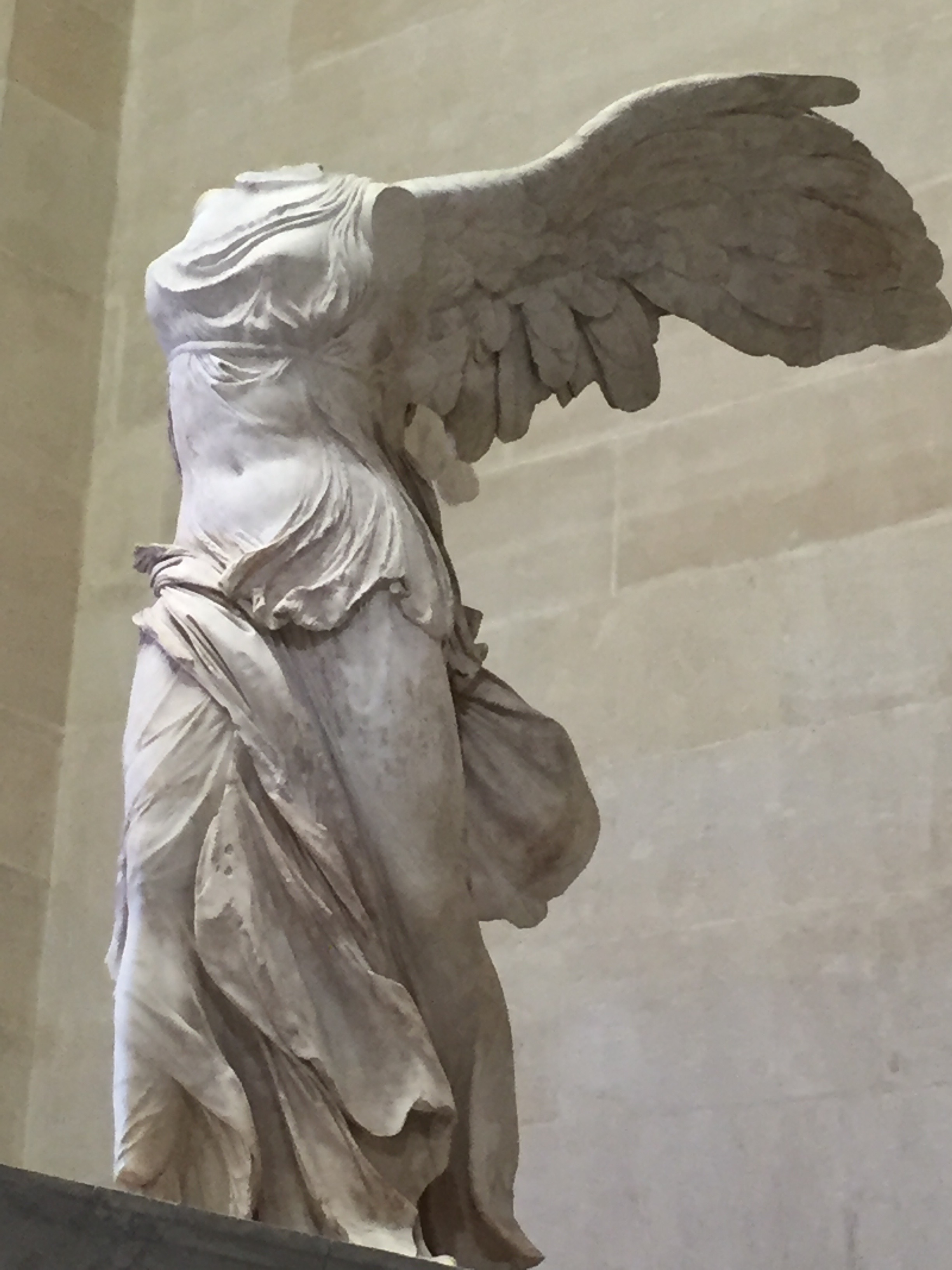 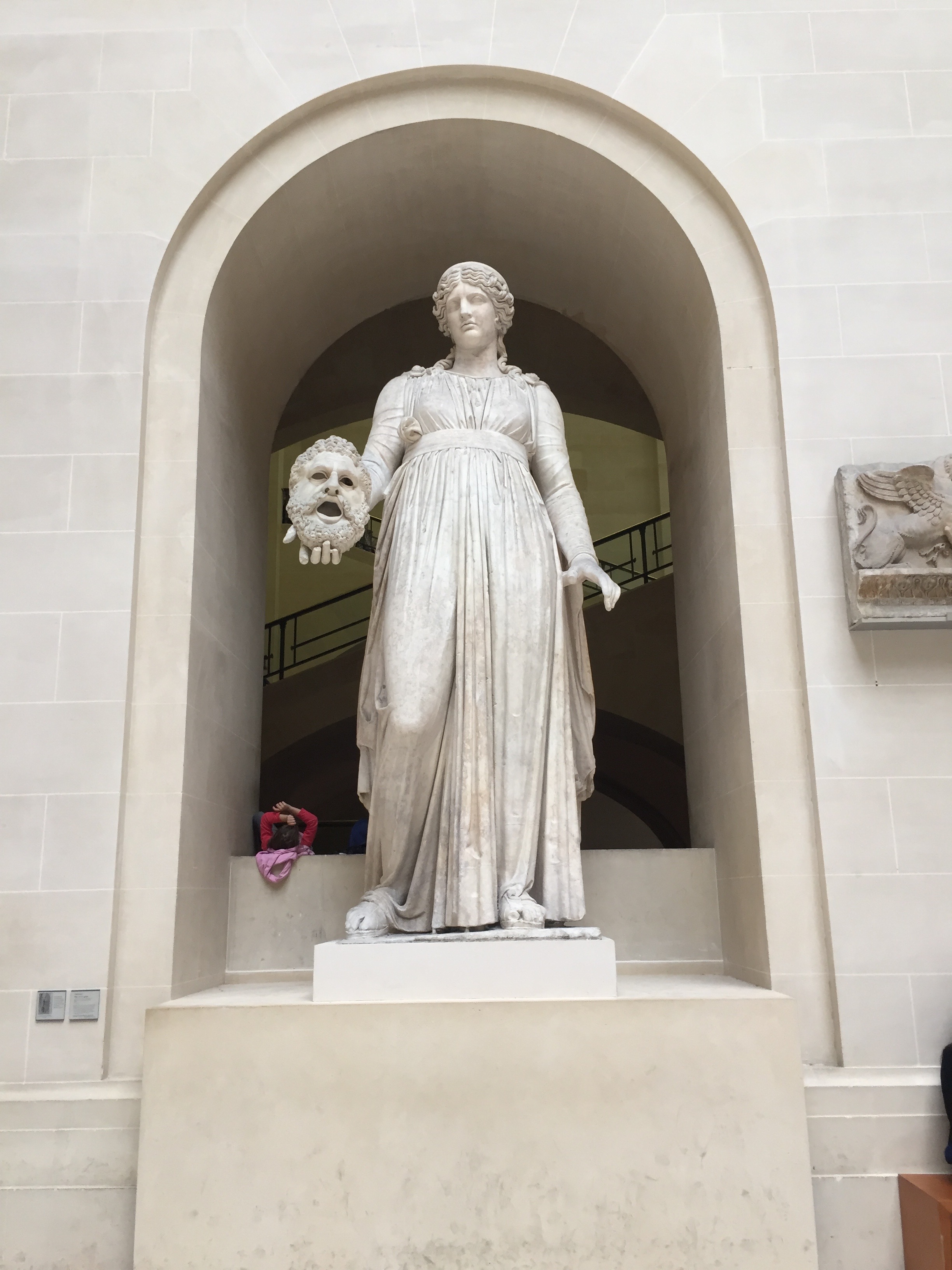 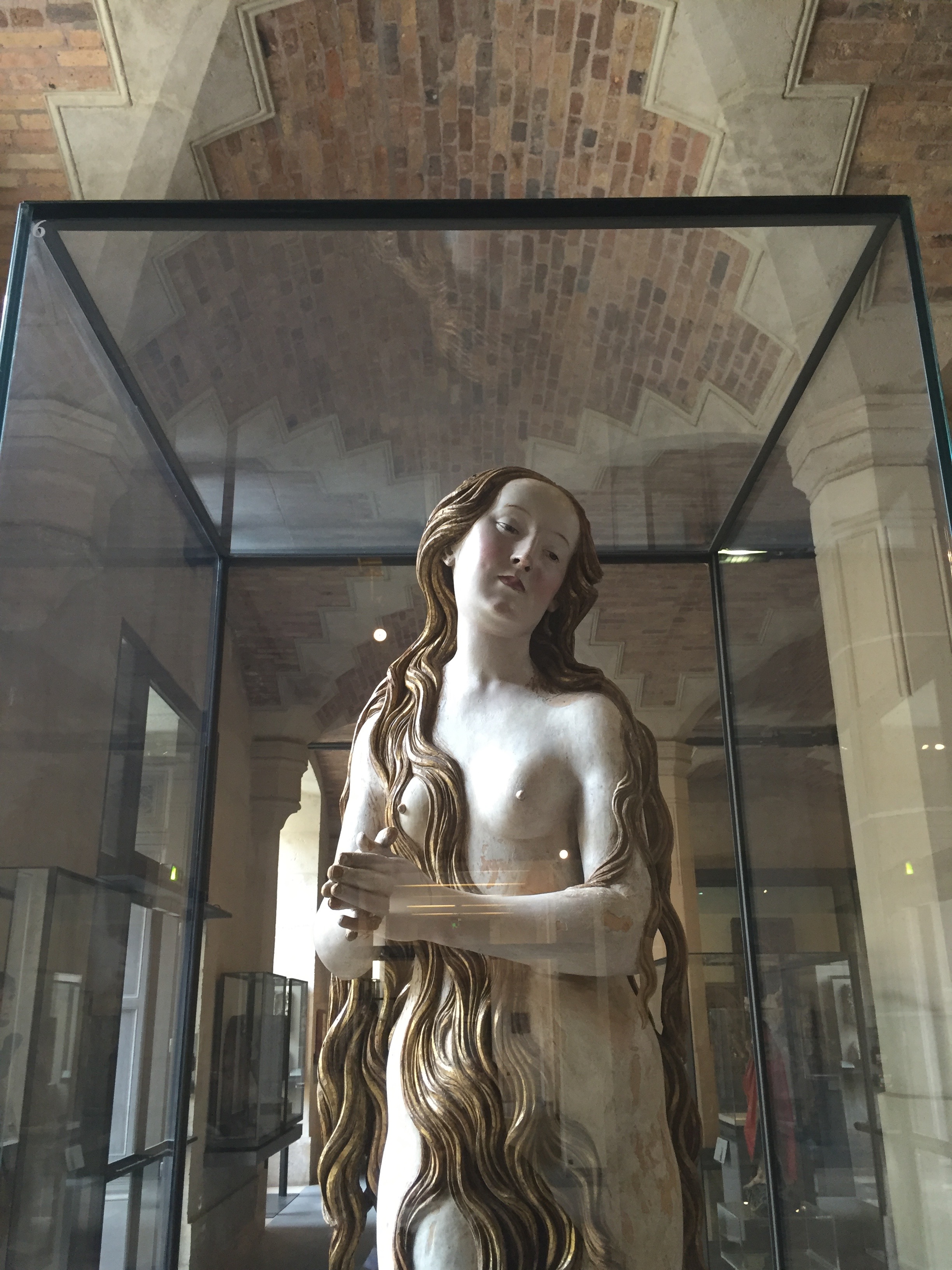 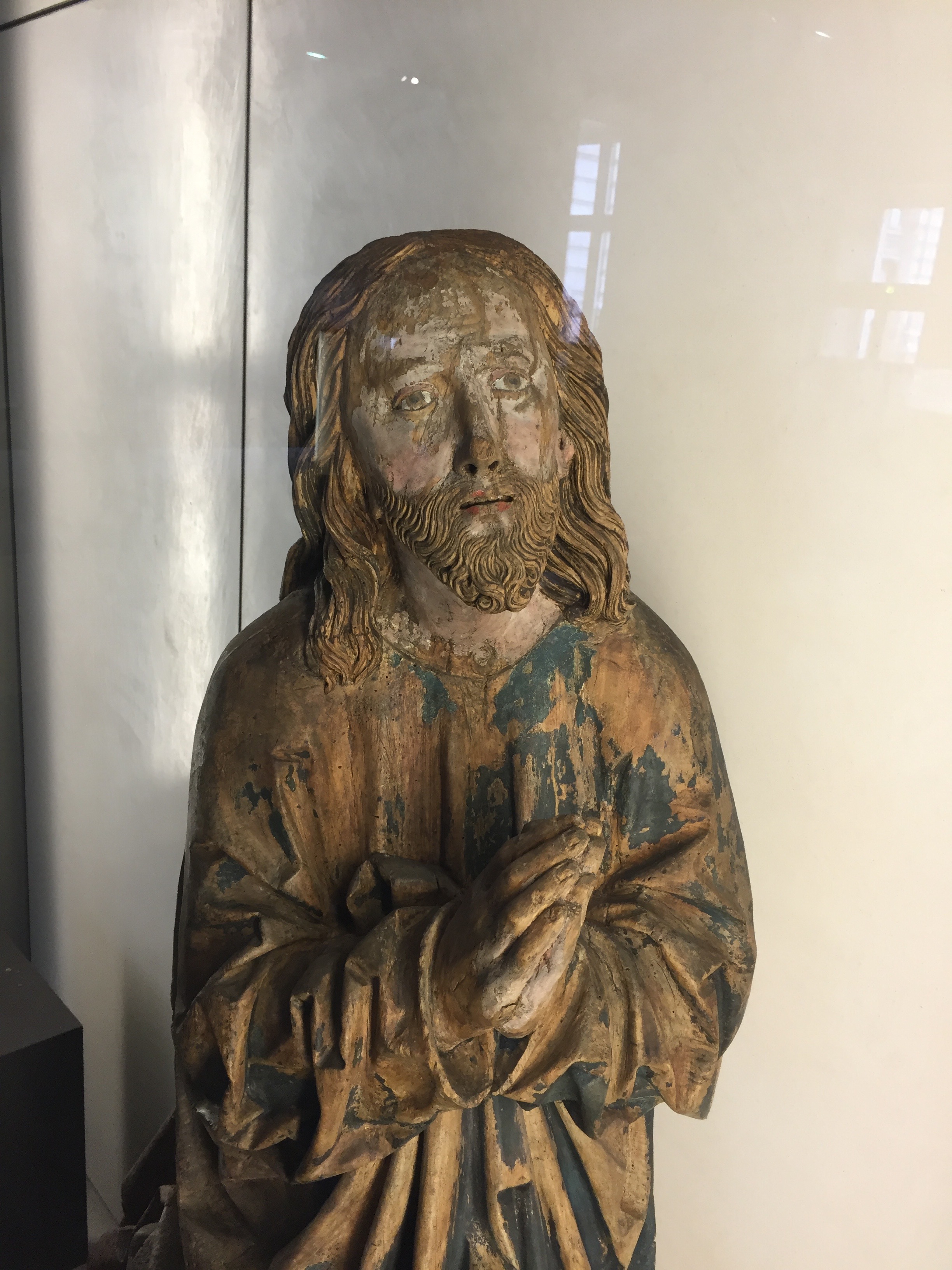 The biggest takeaway besides the pure beauty and skill of the Masters was my inability to separate fact from fiction. I touched an ancient column removed from the Temple of Artemis built in 560BC. My hands could touch it but my mind was saying, “But, this isn’t real. This was from Mythology.” I’m not sure if I’m a victim of an anti-European education system or lack of attention. Either way, I walked out of the Louvre with an experience I’ll remember for the rest of my life.

The next day we walked around Paris on our on. Dede’s sense of adventure and knack for research led us to a little spot called Shakespeare and Company. Writers and artists like Ernest Hemingway, Ezra Pound & F. Scott Fitzgerald would all gather here. Today it’s been revamped as a bookstore, writers closet, readers room and literary Mecca. No pictures are allowed though. Afterwards we hopped over to the Notre Dame & then the Eiffel Tower. What a city! 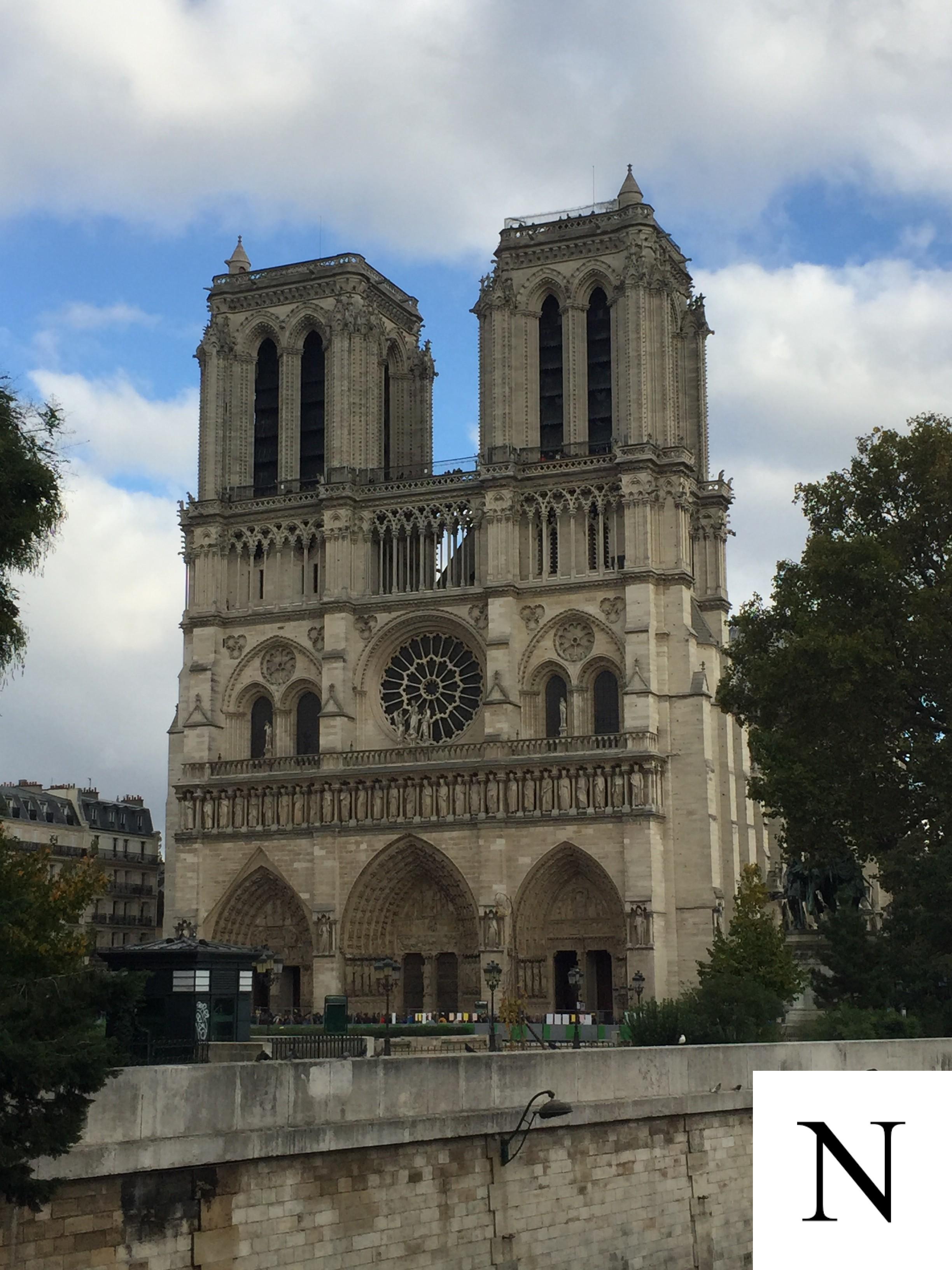 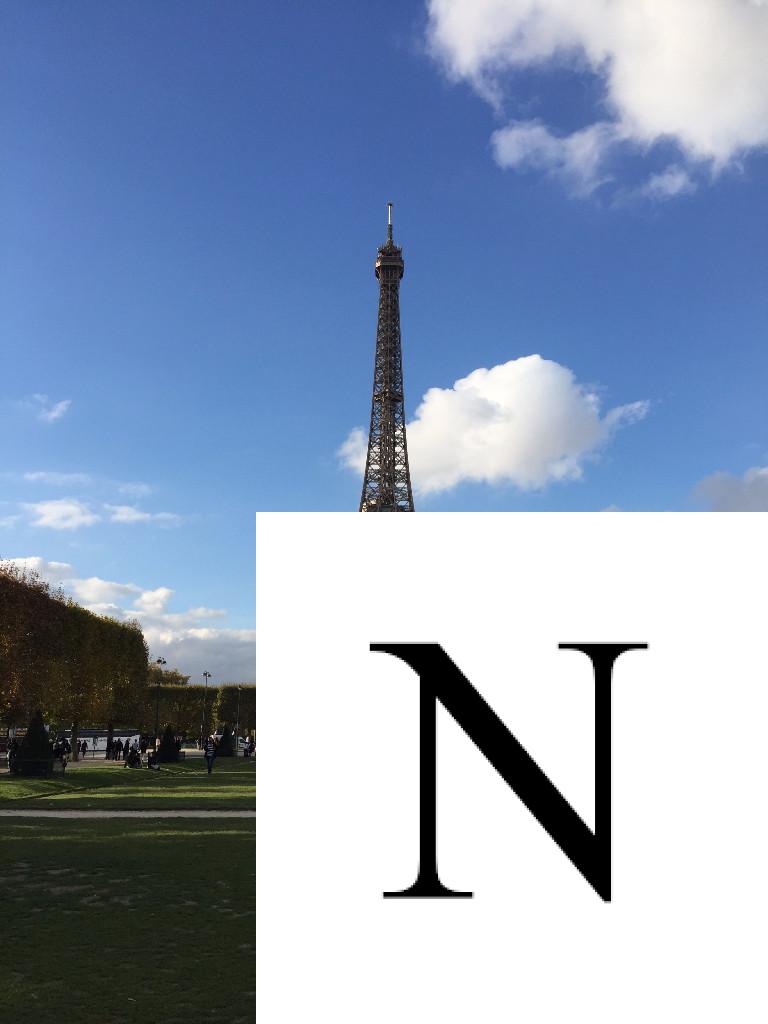 It’s only now that I can truly echo the words of that sweet Sabrina Fairchild and say, “Paris isn’t for changing planes, it’s for changing your outlook, for throwing open the windows and letting in La Vie En Rose”

How To Reach Your Goals: Step 3. Reverse Engineer Your Goals.
The Pictures
City of Bridges