Bro! Do You Even Lift? 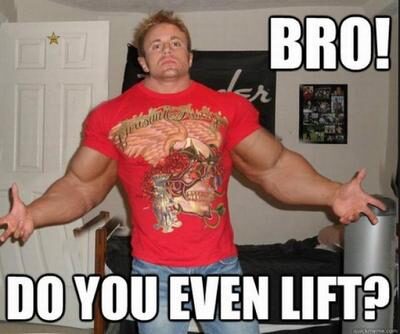 I know you were wondering, so yes, I do go to the gym a few times a week. While I wouldn’t consider myself a GymBro I have seen my share. You know the GymBros, the guys at the gym with the deep deep deep V and oversized “barely resembles a shirt” shirt. They’re usually found in their native habitat, near the bench press comparing bulking routines and daily calorie intake.

If you’re not familiar here’s a quick lesson on the top 4 GymBros.

He’s got the look and knows it.
Known to flex after each lift.

Most of the time they’re just standing around talking and comparing abs while everyone works out around them, waiting for all 9 to do a set on the one Preacher Curl Bench.

In a word – Loud. In two words – Obnoxiously Loud.
He screams, grunts, yells and makes a series of purely performative noises.
Just stop! It’s awkward for everyone.

The only thing that tops the heinousness of Selfie Bro is Film Me Bro.
Because sometimes you can’t capture your full glory from only 2 feet away

At my last trip to the gym I was both shocked and unprepared for the lesson I was about to learn.
I learned that no matter the size or apparent strength of the person (GymBro or not) we all succumb to the same fate, we all suffer the same end, we all eventually… get tired. No matter  who you are. Whether you’ve been working out for 30 mins or 2 hrs, we all have our breaking points.

The other day I saw a guy at the gym who has to eat 1,000 calories and a pack of free range children as a pre workout meal. With every muscle in his body and every fiber in his being he was desperately trying to lift 30 lbs over his head. For perspective, the average 3 year old is 28-30 lbs. (not NesBabies, mind you you, they tend to be “small”) He was struggling. He was grunting. He was spitting. He was straining. He was barely making it. When this marvelous feat was finally over he put it all away and went home. As he was leaving I felt this feeling come over me. It was a weird sort of Pride. An arrogant pride. And no sooner than I felt it, I sensed his brother, Shame.

Why was I feeling prideful at watching this dude struggle?
Because, for a second, I felt superior.

This was a big dude and he couldn’t lift 30 lbs!  He’s a fake. He’s a fraud. I’m doing that as a warm up. I didn’t look as good but in every way felt better, superior.

I mean all he had to do was work harder, do better and he would have got er’ done. And just that, just as fast as the words are coming to my mind, I felt awful. Just awful. Here I am judging this guy when it hit me – I just got here. I don’t know how long he’s been here or what he’s been lifting. I have no idea what he’s put his body through. And here I come at the end of his workout ready to judge him based on what I see right now.

Have you ever done that? You know, judge someone by their struggle. Or better yet, judge someone based on what part of their struggle you happen to see. You don’t know how long they’ve been fighting or how heavy their burdens are but you see them right now and are ready to make a judgement call.

All they have to do is cast their cares on the Lord.

See, that’s why I don’t have those problems because I wouldn’t have gotten myself in that position.

And just like that we are superior and stronger then those poor souls before us, gasping for air.

Before we jump the gun maybe we should step back and consider that we may not have all the facts. If we did, we’d probably be over their next to them, spotting them, encouraging them to give it one more push, not tearing them down when they’re at their weakest.

It doesn’t matter if you can lift 10 lbs 100 times or 100 lbs 10 times, we all have our limits. If I judged you by your struggle, I would get a completely different picture of who you really are. I judged that guy after seeing him for 10 seconds.

I hope people give me more grace than I offer.

So remember, the next time you see someone struggling, they don’t need anymore naysayers but they may need a hand.